Media and Press Event for ICON

An icon is born.

So Wednesday 23rd May was the day of the Icon Press event. Which we decided to cancel our Germany trip for.

With the couple of free days we had we visited Alton towers for a stop off to break up the long drive from Kent. We visited Alton Towers for a few rides on Wickerman, Nemesis and the Smiler. All this before staying over at the Splash Landing's hotel and going into the Waterpark on the Tuesday.

You would think with so many Thrill Rides in the park next door and so many water slides with little to no queue we would be re riding all day long… No not at all. After completing all the slides in the first 20 minutes we grabbed something to eat and sat in the sun for hours!

The time had come for us to get dressed and make our way to Blackpool. This would be one of the first times we have visited Blackpool and had a good hotel booked. Normally we like to try B&B's but after some shocking B&B stays we decided to stay in the 4* Big Blue. We were so impressed from check in to check out and the view of Blackpool pleasure beach makes it even better!

We decided to walk to our favourite pub the Velvet Coaster for a meal and a few drinks before heading back to the hotel to get plenty of sleep ready for the big day.

The meeting place was the entrance of the Hot Ice skating show. It was like a go pro advert, everywhere you looked there was a red light flashing, recording for their own blog. We picked up our lanyards and headed to the question and answers press conference. There are so many videos of this online I won't go into detail about that.

We headed towards the entrance to the new ride where we were greeted by Sam the sax man playing while the Thompson family and Mack rides officially opened the ride. The first train to leave the station had the Thompson family and the Mack team riding. It was really funny hearing Amanda screaming all the way round the ride but she did come off smiling so she must have been happy with her £16.5 million investment.

Now it was our turn. The second train of the day and we picked the second to back row. It was time to ride. This ride is being built up to be something special by so many vlogger and bloggers, would it live up to expectations? You leave the station and wait for the soundtrack to kick in at the end of the music you then hear the words ICONNNN and then you launch…… and then 2 minutes later your off the ride.

So what did I think? Well it wasn't good. The word that describes it the best was floaty. The launch was flat and the elements didn't do much for me. I tried to hide how I felt but I don't think I did. What a shame the build up for 2 years and all I could think was this could have been so much better. We went round again to get the on ride video (which may I say was a great idea). The park fitted cameras to the trains and you had to put your own sd card in them for you own video. We went to the front and filmed the ride this time

I came off thinking that was good. Was it just me that was thinking that? Nope, most people I was with said the same. After 5 more rides and another video I finally came off thinking this is great. The trains felt like they were getting faster and faster and moving through the twists and turns quicker and quicker! After dinner and lets say a few drinks which were all free, I had a photo with Amanda Thompson and went on a mission,

13 rides without getting off the train. Taking it to a total of 20 for the day. The Boy next to me was on his 20th ride without getting off (crazy) andI totally changed my opinion on the ride. This is my number 1 coaster in the UK taking the top spot from Swarm. The launch is enough force to push you over the first airtime and into the interactions with the other rides and then into the first inversion which is taken very slow. Apart for G-force at Drayton Manor which is a different train, it is the first coaster to go upside down since the Thunderlooper at Alton Towers. You jump into an airtime hill under the bridge and then smile because there will be people standing there taking photos of you. You go into the smoke,the second launch and into the an 88.5ft tall Immelmann loop, the tallest part of the layout. A series of highly banked turns,helix's, airtime hills and s-curves follows before the train hits the brake run and re-enters the station.

We would love to hear what you think?

Overall i think it's a great coaster for Blackpool, The UK and even Europe. People will be traveling from all over the world to tryout this ride and they should. It is a first double launch coaster in the UK and it sits proudly in such a great park. The day was one of the best days we have had in a theme park and it was great spending the day with some great friends finishing the day on the wettest water ride ever Valhalla.

Thanks to Amanda Thompson and the press team for our invite. It was very well organised and the best media day we have been invited to so far.

Next it was Chris’s Turn. Chris was at Blackpool for the official opening to the public Friday 25th May.

I was just about as hyped as Paul for this ride. It’s a coaster I have been following from the very start, its been brilliant watching it grow and the landscape changing.

So I arrive at Blackpool to pick up our wristbands and to be told that the coaster would not be open to the public till 1pm due to VIP rides…. My face at this point is in pure disappointment. Oh well I will still get to ride it. So, we await the opening of the gates and head over to have a look at Icon. I’m shocked at how well the finish product looks. Its stunning, I’m a big fan of the colour and the gold that’s at the entrance and runs throughout the station works really well.

All of a sudden, the crowds start heading down the queue line. Oh so its not a 1pm opening. fair play Pleasure beach, the VIP rides are over and they have opened the coaster for the public. Time for a ride.

To be Honest I’m pretty much of the same mind of Paul. My first ride middle of the train and I was a bit like oh…… But several rides later as the coaster warms up and I start to think yes this is a fantastic coaster. The front of the train for me is much better than the back and the speed of the coaster allows for so much hangtime, that I really like.

I have heard so many people saying that this coaster could have been so much better, but couldn’t we say that about every coaster?

For me what Pleasure Beach and Mack have produced is a fantastic all-round coaster. There is airtime, hangtime and lots of turns. The first launch isn’t the punch we would like, but it does work well for Icon. If I have one negative to say, it’s the position of the on ride photo point. I personally believe it should be on the second faster launch, but that’s just me.

It’s a fantastic coaster and well needed for the UK. It will be interesting to see what it looks like in a years’ time when the landscaping grows around the ride.

For me it does not knock nemesis from my top spot of UK coasters, I’m a big fan of Nemesis and the UK will have to build something really special to knock the old girl off the top peg.

So who do you agree with? We would love to know.

I will catch you down the road.

I will catch you down the road.

How Far Would You Travel?

Media and Press Event for ICON

Launch of an Icon

Theme park Hotels are they worth the cost?

Our Visit to Ferrari Land what did we think?

Alton Towers (We were chosen blog)

Most Popular Rides at Carowinds in 2017 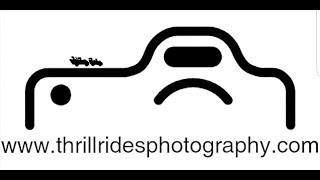 Alton Towers My review into the changes for 2018